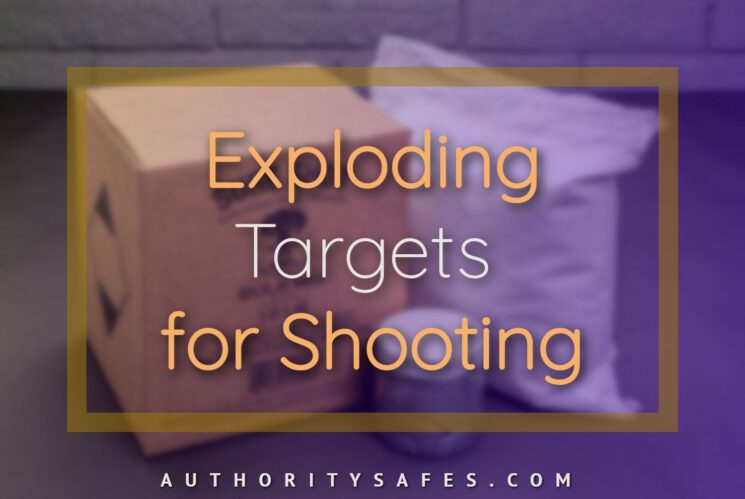 If you believe you are over the traditional shooting range and target practicing, and that you are ready for the next step, we have something for you. We are talking about a move that will bring a huge amount of excitement in your life, something that will immediately boost the level of your adrenaline. Allow us to present to you the tannerite – exploding targets for shooting.

Now, this is not something you can play around with. Tannerite is no joke, and you need to be extra careful around it. That’s why we wanted to make sure you have all the information you need before even getting the idea of using it for shooting purposes. So let’s start from the beginning.

You are probably wondering what is tannerite exactly. Tannerite is a binary explosive that’s been often used as a target for rifles. It is actually a brand name that became a synonym for explosive targets of this kind in general. Like all other binary explosives, it comes divided into two separate compartments that are not explosives per se – oxidizer, and fuel.

Those two parts need to be mixed together when you are ready to shoot. But bear in mind that even when you do that, tannerite is still going to be a stable explosive. It cannot detonate on its own, just like that, if you drop it or hit it by accident. It will blow up only when you hit it with something with a velocity of at least 2000 fps. Also, it is not a flammable explosive, so it cannot be detonated with fire or electricity.

When it comes to tannerite explosions, you can expect the big white cloud to occur and for it to be pretty loud. So make sure you are prepared for that. And don’t forget that this is mainly and primarily exploding target for rifles, given their rounds have high enough velocity to detonate tannerite. Shotguns won’t do the work, as well as handguns, all but one – .22 TCM.

Why Use Exploding Targets?

When it comes to why tannerite targets are so popular, and why they are used for target shooting, the explanation is pretty simple – because of the effect they create. When the bullet hits the explosive target, it will create a loud bang and the sensation of a real explosion.

And that’s what makes people’s hearts race faster. Their adrenaline will jump to the highest level, and according to many shooters, that’s definitely more exciting than shooting a simple piece of paper.

Also, the other reason it is used that much is that it is pretty affordable and relatively safe. Anyone who wants to buy it can, because it is not treated like the TNT or black powder by the Federal government. Tannerite comes as two components that are not treated as explosive on their own, so it is very accessible. You can buy tannerite online or in stores pretty much anywhere. 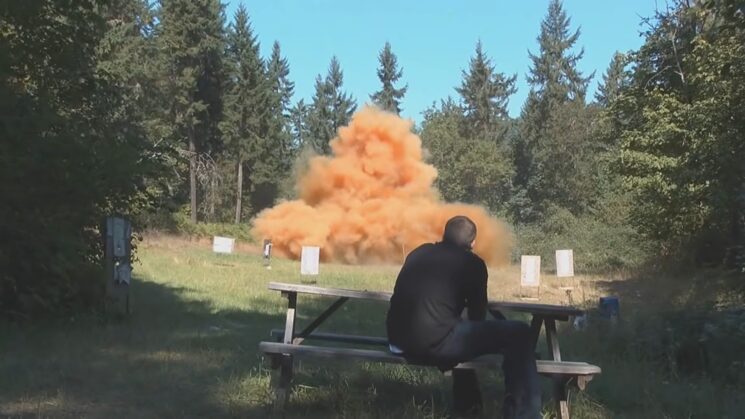 Well, we are talking about an explosive, so it’s not dangerous. It is considered to be a pretty safe compound since it cannot be easily detonated. The velocity of the impact needs to be over 2000 fps in order for it to explode, and there’s no danger in case you drop the bag with tannerite.

Besides that, the explosion it creates is not big, and it’s designed that way for safety reasons. But it can be dangerous given it did happen that people got harmed or even killed by tannerite. In most cases, that was the issue when the tannerite exploded while being inside of containers, so the explosion sent shrapnel all around, which ended up hurting or killing people who were close by.

Of course, that safety has to be a priority when we are talking about using explosive compounds like tannerite. In order to always maintain it, you need to know how to use tannerite, because after all, it can be dangerous if not treated right.

So first and foremost, you need to wear your shooting glasses so you can protect your eyes from any shrapnel. Also, shooting ear protection is another must since the explosion produced by tannerite can be super loud. It is important to make sure that besides you, every person that’s close to the future explosion place has a protective gear on them as well.

Now, we have already mentioned that tannerite is not a flammable explosive per se and that it cannot be triggered by fire or electricity, but it can set a fire when detonated if there are some flammable objects close by. There are reports that show how tannerite caused even wildfires. That’s why you have to make sure something like that doesn’t happen again. Be a responsible shooter, and remove all flammable things away from the tannerite just in case.

However, if you insist on having some items blown up, because of the effect, stick to things like chalk-filled eggs, melons, or simply dirt piles. Those detonations won’t create shrapnel that can hurt you or the people around you for sure. And when it comes to how far the tannerite target should be placed from people and animals in order to remain absolute safety, the 100 yards should do the work. So don’t position the target closer than that.

The experts suggest that people who don’t have experience with handling tannerite use up to one pound of the mixed compound at once. Also, given that it is pretty toxic, they are underlining that you should keep this explosive away from children, in some safe and protected place. Make sure it cannot be accessed by anyone but you.

When it comes to legal issues, using tannerite is not a problem. That’s because you are not buying it as an explosive, but as two separate compounds that are not in that category. Since you need to mix them first in order to get an explosive substance, the law won’t be in your way.

As an individual, you have a legal right to manufacture explosives, but only in order to use them for your own needs. If you plan on doing that for the purpose of selling it, you will need a license.

Also, you can ship and transport tannerite only if it’s not mixed. Only, in that case, the shipment will be legal. Otherwise, if you have already made a mash of those two compounds, you are not allowed to ship it or transport it by any means. Bear in mind that tannerite is forbidden in some places like in Pacific Northwest regions and US Forest Service land in the Rocky Mountain, because of the risk of fire.

Some other properties may also have banned it, so it is important to first check if it’s permitted before purchasing it and using it for shooting purposes in public areas. Local and state laws can also have their own saying about tannerite. They may have some restrictions in a matter of who can use it, is there a license required, how much tannerite can you legally set off, etc. and it is crucial to have that information in time.

Shooting tannerite can be so much fun, but it is crucial that you approach it with maximum caution and with nothing but safety on your mind. It’s a little bit like playing with the fire, you are risking being burnt, but in this case, there’s a risk of being seriously hurt, so we needed to make sure you get this right.

You need to use tannerite wisely, with all precocious measures being taken, from having a safety gear on you and making sure all other people around you are also protected, to using it in the right distance and the right amount.

Now, you need to know how exactly tannerite works so you can understand what we are talking about. We already pointed out that there are two compounds that need to be mixed up – fuel and oxidizer.

The fuel needs to react to something in order to create energy, in this case, we are referring to the kinetic one. The oxygen atoms provided by the oxidizer will do the work. So when that connection is established, the fast-moving bullet will create energy strong enough to set off the explosive reaction.

It’s pretty clear that you are going to have a blast with tannerite targets, especially if you are a passionate shooter who’s looking for some additional excitement. The experience of hitting the target that will blow up, literally will bring so much fun into this activity.

We are certain you will make sure not to endanger yourself or others while doing so, so we won’t lecture you again. We will just wish you luck and emphasize hope that you will manage to improve your shooting skills with this powerful explosive target in your service.